Another quick picture guide, This time about my experience mounting and using a Zalman VF900-cu VGA cooler as a CPU cooler for my AmigaOne-XE G4

As always, sorry for any spelling errors in the text, or bad wording. But i’m danish and english is not my native tungue.

Feel free to post your thoughts to me on labo@tiscali.dk

Click on any of the pictures to get them in Hires 1632×1232, all pictures have been shot with a rather old 2mpixel Kodak CX4230, so don’t complain to me about the picture quality. :-)
—————-
For overclocking, read the part a the bottom. (not finnished yet) 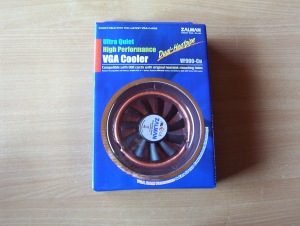 This is what was in the package. The cooler it self, 8 memory chip coolers, a fan control unit, extention cord for the fan controler, a manual, cooling paste, a bunch of screws and washers, and a neat little thermal take case badge.

A side view shotof the cooler to show how slim this thing really is.

Bottom side of the cooler, notice the mirror like finish on the cooling block.

Again, to show the extremly polished and mirror finnish there is on this cooler.

After figuring out which mounting point to use, i screwed in the mounting bolts into the cooler.

I then pulled out the CPU card, and cleaned the CPU for Cooling paste. 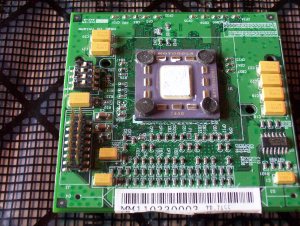 Gave the CPU core a fresh coat of paste. this time using the Zalman cooling paste which came with the Cooler.

Then i gently and very carefully placed the CPU card upside down, on top of the Cooler.

The bolts which is normally used, when mounting this cooler on a graphics card.

And as you might have guess, The mounting bolts is way to big to be used for a CPU card. there is no way these bolts would fit in between the Mainboard and the CPU board, so i had to think of another solution. 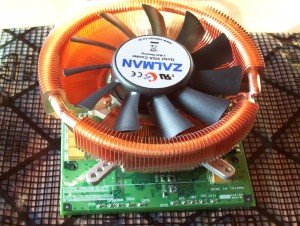 Top side, the cooler don’t look all that big on the CPU card, it’s actually a very nice size.

Side way shot, to show that there is Plenty of clearence around any of the components on the CPU card. 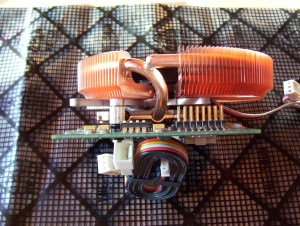 Another sideway shot, just to show how slim it really is, even when mounted on the CPU card, this thing is really not that big.

So thats it, the system is testet ok, and when turned on, and the fan set to low noise. i have now been able to run DnetC rc5-72 for about 1 hour, and the cooler is not even warm to the touch. (this at 800mhz and 1.59vcore)

– Conclusion –
I’ve got a very good feeling about this cooler, it’s whisper quiet, and i would guess that even when the fan is set to 5volt, it would have no problem keeping the G4 cool at 800mhz.

This sections is still work in progress for this cooler!!

Word of advice to anyone. If you don’t feel good about doing this, DONT TRY IT!

This is a copy of the page http://www.debornell.dk/VF900cu/